Below are some water facts that you probably do not know and will find interesting.

Contrary to popular belief, raindrops are not shaped like teardrops.
Small raindrops (with a diameter of less than 0.1 inch, or 0.25 cm) are shaped like a sphere; larger ones are shaped more like a hamburger bun.

A person must consume 2.5 quarts of water per day from all sources
(drinking and eating) to maintain health.

There is the same amount of water on Earth as there was when the
Earth was formed. The water from your faucet could contain molecules
that dinosaurs drank.

Americans drink more than 1 billion glasses of tapwater per day.

There are approximately 155,000 public water systems in the United
States. The USEPA classifies these water systems according to the
number of people they serve, the source of their water, and whether they serve the same customers year-round or on an occasional basis.

The abbreviation mg/L stands for milligrams per liter. In metric
units, this is used to express the weight of a chemical dissolved
in 1 liter of water. One liter is equal to about 1 quart, and 1 ounce is equal to about 28,500 milligrams, so 1 milligram is very small amount. About 25 grains of sugar weigh 1 milligram.

Water is a contradiction, a riddle. Why? Consider the Chinese proverb that “water can both float and sink a boat.”

Water is sometimes sweet and sometimes thick or thin.

Water suffers changes into as many natures as are the different places through which it passes.
Water, as with the mirror that changes with the color of its object, so it alters with the nature of the place, becoming: noisome, laxative, astringent, sulfurous, salt, incarnadined, mournful, raging, angry, red, yellow, green, black, blue, greasy, fat or slim.
Water sometimes starts a conflagration, sometimes it extinguishes one.
Water is warm and is cold.
Water carries away or sets down.
Water hollows out or builds up.
Water tears down or establishes.
Water empties or fills.
Water raises itself or burrows down.
Water spreads or is still.
Water is the cause at times of life or death, or increase of privation, nourishes at times and at others does the contrary.

Water, at times has a tang, at times it is without savor.
Water sometimes submerges the valleys with great flood.
In time and with water, everything changes. 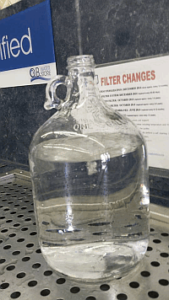 One gallon of water equals 3.785 liters.

One ton of water equals 240 gallons.