We get asked all the time, “What Does TDS Mean?” It means Total Dissolved Solids, and we have some TDS facts you should know.

Where Do Dissolved Solids Come From?

Some dissolved solids come from organic sources such as leaves, silt, plankton, and industrial waste and sewage. Other sources come from runoff from urban areas, road salts used on street during the winter, and fertilizers and pesticides used on lawns and farms.

Dissolved solids also come from inorganic materials such as rocks and air that may contain calcium bicarbonate, nitrogen, iron phosphorous, sulfur, and other minerals. Many of these materials form salts, which are compounds that contain both a metal and a nonmetal. Salts usually dissolve in water forming ions. Ions are particles that have a positive or negative charge.

Water may also pick up metals such as lead or copper as they travel through pipes used to distribute water to consumers.

Note that the efficacy of water purifications systems in removing total dissolved solids will be reduced over time, so it is highly recommended to monitor the quality of a filter or membrane and replace them when required.

Why Is High TDS Readings Bad For You

High TDS results in undesirable taste which could be salty, bitter, or metallic. It could also indicate the presence of toxic minerals. The EPA’s rescommended maximum level of TDS in water is 500mg/L (500ppm).

The EPA Secondary Regulations advise a maximum contamination level (MCL) of 500mg/liter (500 parts per million (ppm)) for TDS. Numerous water supplies exceed this level. When TDS levels exceed 1000mg/L it is generally considered unfit for human consumption. A high level of TDS is an indicator of potential concerns, and warrants further investigation. Most often, high levels of TDS are caused by the presence of potassium, chlorides and sodium. These ions have little or no short-term effects, but toxic ions (lead arsenic, cadmium, nitrate and others) may also be dissolved in the water.

Even the best water purification systems on the market require monitoring for TDS to ensure the filters and/or membranes are effectively removing unwanted particles and bacteria from your water.

How can water with high TDS be undesirable or harmful?

It may taste bitter, salty, or metallic and may have unpleasant odors
High TDS water is less thirst quenching.
High TDS interferes with the taste of foods and beverages, and makes them less desirable to consume.

Some of the individual mineral salts that make up TDS pose a variety of health hazards. The most problematic are Nitrates, Sodium, Sulfates, Barium, Cadmium, Copper, and Fluoride.

If a person drinks 2 pints of water a day, this will total 4500 gallons of water passing through his body over a 70 year span. If the water is not totally pure, this 4500 gallons will include 200-300 pounds of rock that the body cannot utilize. Most will be eliminated through excretory channels. But some of this will stay in the body, causing stiffness in the joints, hardening of the arteries, kidney stones, gall stones and blockages of arteries, microscopic capillaries and other passages in which liquids flow through our entire body.

In general, basic activated carbon itself has some catalytic activity due to the presence of a small number of chemical functionalities present on the corners of its graphitic basal plane. To enhance the catalytic activity of carbon, the surface is modified by a chemical process in which the electronic structure of the carbon is altered in such a manner that the resulting carbon offers enhanced catalytic capability.

As a result, the catalytic carbon produced by this method is not only rich in chemisorption, but also physisorption capacity. 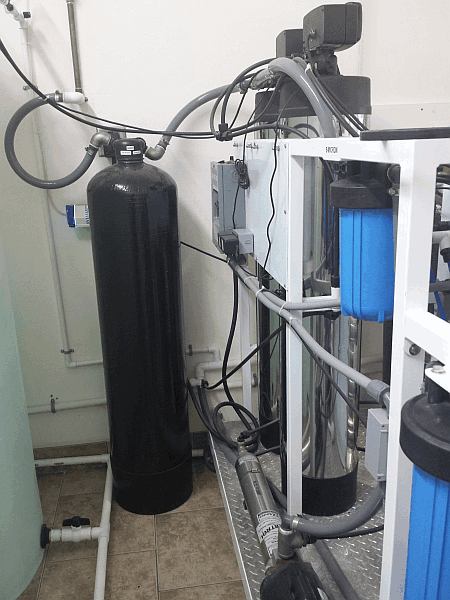 Many water utilities across the U.S. are transitioning to chloramine for disinfection as an alternative to chlorine. This change is in response to stricter U.S. Environmental Protection Agency regulations on disinfection byproducts (DBPs), which are created when chlorine reacts with organics in water. Chloramine, a combination of chlorine and ammonia, is more stable and does not create DPBs.

In general, the catalytic properties of carbon are measured by the rate at which carbon decomposes hydrogen peroxide. The resulting peroxide number, measured in minutes, estimates the carbon’s utility in any catalytic application, including chloramine reduction. Based on the comparative results obtained for different mesh size commercial carbons, the efficiency of chloramine reduction is discussed in the terms of peroxide decomposition capacity and further extended to the total life (volume) claims for corresponding GAC cartridge and carbon block.

Our 13 stage filtration system reduces TDS levels to the lowest level possible. Our daily testing shows readings of only 2 or 3 and that reading is just some natural minerals in the water.

You can read our daily water test readings on our home page right here.