Many of our customers have asked us about the Carlsbad Desalination Plant that started operations December 2015, so we thought we would give you a overview on what it is and how it works. Water treatment on a large scale is very important for our area with the water shortage we are experiencing. 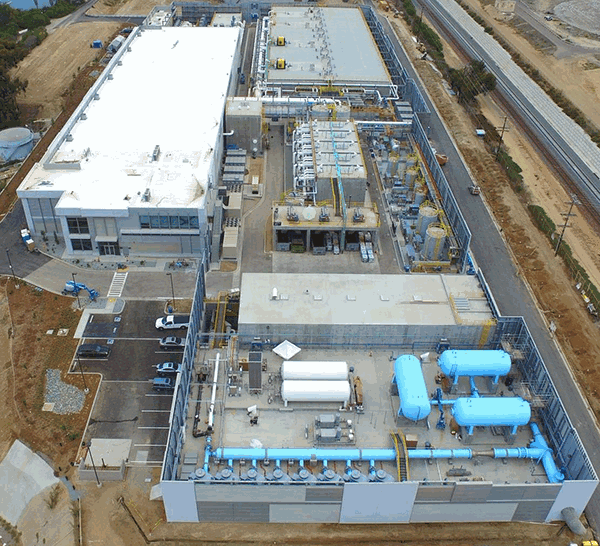 The Claude “Bud” Lewis Carlsbad Desalination Plant is the largest desalination plant in the United States, this 50 million gallon per day seawater desalination plant located adjacent to the Encina Power Station in Carlsbad, California. Desalination has evolved into a desirable water supply alternative by tapping the largest reservoir in the world – the Pacific Ocean. The technology, available for decades, is at work in many arid areas of the world including the Middle East, the Mediterranean and the Caribbean. A 30-year Water Purchase Agreement is in place between the San Diego County Water Authority and Poseidon Water for the entire output of the plant. The plant has been delivering water to the businesses and residents of San Diego County since December 2015.

Poseidon Water of Boston owns and operates the structure, which it built for $1 billion. The San Diego County Water Authority, the region’s main water manager, is buying the desalinated water under a 30-year purchase agreement.
Called the Claude “Bud” Lewis Carlsbad Desalination Plant, the site is named for the late Carlsbad civic leader and mayor who was a major supporter of the project and once served as the water authority’s chairman.

The subcontractor, IDE Technologies has extensive experience developing engineering, producing and operating advanced desalination facilities, among other water and energy related projects. The firm has been in operation over 45 years as an Israeli state-owned enterprise to create advanced desalination technologies. The firm has researched and developed both thermal and reverse osmosis desalination technologies, with RO having been successfully deployed at scale in large and small scale operations. Currently there are about 400 IDE designed systems operating in 40 countries with a total capacity of about 528 MDG.

1. Pre-treatment
Pre-treatment is the first stage of the desalination process. When seawater arrives at the plant, it goes through a pretreatment process to remove algae, organic materials and other particles. Seawater is pumped into multimedia filter tanks, which include layers of anthracite and sand atop a bed of gravel. Once filtered, the water moves into the next stage of desalination.

2. Secondary Pre-treatment
Before seawater enters the reverse osmosis filters to remove the salt particles, it must go through a second stage of pretreatment called microfiltration to remove smaller – oftentimes microscopic – impurities. At this point, virtually all impurities other than dissolved salts and minerals have been removed from the water, but it still needs to go through one more step to remove the dissolved salts and minerals to be ready for drinking.

Reverse osmosis works by pushing water – under intense pressure – though semi-permeable membranes to remove dissolved salts and other impurities. These membranes act like microscopic strainers that allow only water molecules to pass through, leaving behind the salt, minerals and other impurities such as bacteria and viruses. The high pressure needed to do this is six times the pressure of a fire hose.

In addition to the reverse osmosis membranes and pressure vessels, this building houses 144 state-of-the-art energy recovery devices produced by Energy Recovery, Inc. The energy recovery devices work by capturing the hydraulic energy created by the high pressure reject stream of seawater produced during the reverse osmosis processes and transfers it into incoming seawater, without consuming any electrical power themselves.

These devices save the plant an estimated 146 million kilowatt-hours of energy per year, reducing carbon emissions by 42,000 metric tons annually – roughly equivalent to the annual greenhouse gas emissions from 9,000 passenger vehicles.

4. Post Treatment
After reverse osmosis filtration, the fresh water is nearly ready for consumption. But before making its way to your faucet, the water must undergo “post treatment.” This includes adding some minerals back into the water and disinfection with chlorine.

5. Product Water Storage
Once the desalination process is complete, the water moves to the product water tanks, where it is then pumped 10 miles to the San Diego County Water Authority’s Second Aqueduct in San Marcos. Here, the water is blended with the regional supply and transported to a faucet near you.

Two gallons of seawater will be needed to produce each gallon of drinking water. And to remove the salt, the plant will use an enormous amount of energy — about 38 megawatts, enough to power 28,500 homes — to force 100 million gallons of seawater a day through a series of filters and membranes in the reverse osmosis system mentioned above.

There are currently three other desalination plants in California all in the Southern part of the state, with eight more proposed.

Our 13 stage Reverse Osmosis system filters and cleans your water the same way but in a much smaller scale insuring you the best tasting and healthiest water in San Diego.